How Does Playing the Felt Gaming Card-game Catalogue Feel in Online Casinos?

Established in 2013, Felt Gaming is a software developer that focuses on making only table games. Unlike the rest of the gaming industry, the studio isn’t interested in making video slots for the majority of player; nor do they make live dealer games like Evolution Gaming. Instead, their specialization in card games gives them the opportunity to only focus their resources (dedicated team and funds) into making solid titles

In this review of Felt Gaming, we will be going through the buildings blocks that make up the studio in online casinos. Sure, the software provider isn’t exactly in the gaming scene too much these days (that much we admit), but that doesn’t mean they don’t deserve a more in-depth look. We’ll touch upon their unique catalog of games, their software’s mobile compatibility, and the general likes. 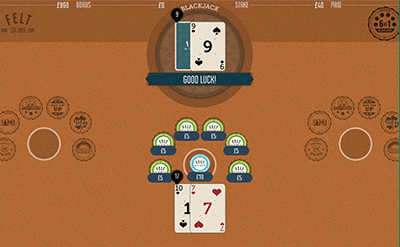 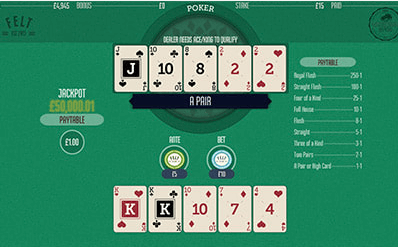 Should You Play at Felt Gaming Casino Sites? If you’re a lover of card games, then our answer is yes, you should play at casino sites offering Felt Gaming titles. The games are immersive, rewarding, and most importantly, can be influenced by strategies from the player; It’s just the fact that their catalog isn’t that big, that makes the whole experience underwhelming (we’re personal here).

What are the cons? Felt Gaming casinos are most times never standalone. If you do ever find an online casino that offers strictly Felt Gaming, we recommend you take a good, long look at the quality of their services. Often, casino sites offer table games as a complement to a vast library of slots from other developers.

Compared to other studios who have had up to two decades of experience to make lots of games, Felt Gaming has only been in the business for a small while (going 6 years now). So far, the company has made 13 card games, with each one meticulously done. It’s obvious that the software provider prioritizes quality over quantity. And from what we’ve seen in the games, they have a lot of playability while also being rewarding. All the games in the studio’s catalog are listed below. 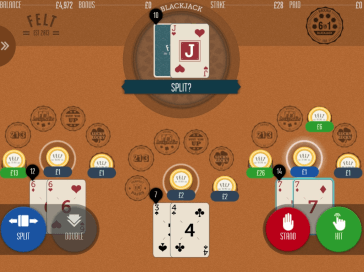 From what we have listed above, we can say the software provider has made seven varieties of Blackjack, three Poker varieties, and one Roulette game in the form of the Double Ball Roulette. All of the types that you see here are all about side bets, and they can drastically change the RTP of each game. We recommend the 6-in-1 Blackjack even if you’re not going to play anything else.

The developer makes games that combine both traditional (inspired by card games in 1960’s Las Vegas casinos) and modern elements to create some of the best true-to-life atmospheres that we’ve witnessed in card games so far. The trick is that the games the studio creates are visually stimulating like video slots, and still allows players to make big wins if they can influence their luck. Each of the game is designed to offer returns of up to 2000 – 1 which is both staggering and attracting, at least to players who love card games.

How Mobile-compatible are Felt Gaming Titles?

Felt Gaming was founded in 2013, which means they understood what the market wanted. At the time also, good technology didn’t come at deadly prices (at least for the company), so it made things easy and smooth for the studio. Let it be said in any discussion that games from Felt Gaming have HTML5 built-in to enable instant-play through browsers on your mobile devices. With tech now readily available for everyone and thus, cheaper, you’re in luck if you’re using any one between a Windows device, or iOS/Android phone.

While Felt Gaming is unlike most software developers, their specialization has still earned them a lot of reputation. Games from the studio are offered in many online casinos, but that doesn’t mean each casino site is equal to the other. To that, we’ve created a list of the best online casinos we know. Most times, the sites have certain characteristics which, of course, includes fast and reliable payment processing, friendly/effective customer support, stable site, and availability of multiple payment options: Rich Ride Casino, 666 Casino, Everum Casino, 333 Casino, Dream Vegas, The Online Casino, Vinnare Casino, Blackspins, Red Spins, Unibet, Slotsmillion