Established in 2014, Uptown Aces is a new casino, and yet it is not! In the fierce competition of this industry four years is a lot of time. A period enough to prove yourself as trustworthy or go out of business. It split from Desert Nights Casino as an operator that will be powered solely by Realtime Gaming software and will serve the developer’s thousands of fans. From then on, it is a simple formula. Provide the best of games, be accurate and fair to the players and respect their winnings. Let’s find out whether they adhere to all this! 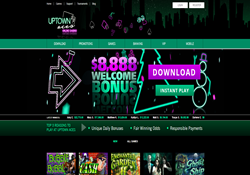 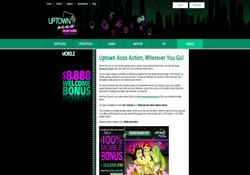 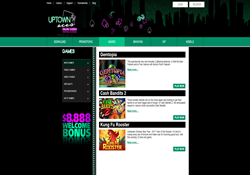 A “Killer” Welcome Bonus Is up for Grabs 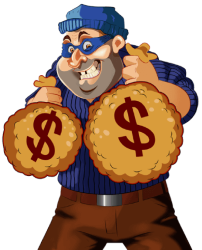 The number of wealth and abundance in Hinduism, a lucky charm for the Chinese and holy for the Japanese, the number 8 is mysterious and loved throughout the world. That is probably one of the reasons, that here at the Uptown Aces Online Casino they have come up with an $8888 welcome bonus that will make you dream!

Uptown Aces Bonus department have thought about the table game lovers as well. The specially designed one with a Coupon Code “TABLEACES 1&2” will give you the option to claim it twice and wager it on your favorite titles. It has a 30x wagering requirement and consists of 150% match up of up to $750 on the first and 75% of up to $750 on the second deposit.

The Cryptocurrency maniacs will have the option to cash in on some nice bonuses as well. Bitcoin 300% match-up is offered on occasions, so all you need to do is sign-up and check your notifications often. The moment it is active, you can take advantage of it and use your investments in digital currency to have some fun.

Uptown Aces Online Casino has thought about its loyal players and is rewarding them accordingly. There are four different levels. Neon, Downtown, Midtown, and the highest Uptown will give you better wager – comp points conversion rates and will thus increase your bonuses. To give you a real money example, at the lowest a $9 bet results in the accumulation of one point while at the highest it is down to $4. One hundred points can be exchanged for $1, which needs to be wagered only once and is withdrawable.

A Journey of Magic, Heroes and Ancient Gods

The topic of the site is the Neon Lights Flashing uptown bar on a Friday night. The picture of the city at night with skyscrapers set against the stars on a busy summer evening make you daydream. All the 7s, cherries, card suits, and dices flash tempting made of colorful glass tubes.

Once you log in, the casino looks all so familiar with an easy navigation menu on the left, black backgrounds and white, and fluorescent green buttons. The principal supplier of the games is Realtime Gaming, a well-known developer which some of you may have tried already.

Uptown Aces Games are divided into Slots, Table Games, Video Poker, Specialty, Progressives, and New. The first comprises the majority with 3 reel, 5-reel, 6-reel, and progressives. Some of the 3 – reel ones are the popular Sevens Stripes, Double Ya Luck, Scuba Fishing and the festive Santastic! which evolves around Santa and Christmas Jackpots. The 5 – reel games have titles such as Achilles, Aladdin’s Wishes, Ancient Gods and Caesar’s Empire. Now finally comes the real deal – the Progressives. Six titles make the shortlist – 3 Slots and Three Poker ones. Aztec’s Millions, Megasaur and Spirit of the Inca can make you a rich man while Caribbean Hold’Em, Stud and Let’Em Ride may help you walk away with a hefty balance.

Most Played Games at Uptown Aces

Table games are represented very well, and you are likely to find everything you wished for. Blackjack has seven variants with Perfect Pairs, Face Up and Matchplay among them for a perfect experience. You also have Baccarat, Caribbean Poker, and Three Card Poker. The fans of roulette are likely to spin the ball with American and European Style available. You can also roll the dice and bet on Craps.

The fans of Video Poker will find a game or two that will suit them for sure. You have the Jacks or Better, Loose Deuces, Aces and Eights and Joker Poker among the most popular variants. You can play it with one or more hands, which is awesome, so your fun Is guaranteed.

Playing on the Go with Uptown Aces

The site of Uptown Aces Mobile Casino is developed in HTML 5 and is fully responsive when accessed from a mobile. It runs, plays and feels great and although you will find a reduced number of games available, the most popular titles are here to play. The slots lovers will be pleased to find Achilles, Ancient Gods and Caesar’s Empire available on your portable. The hugely popular progressives Aztec’s Million and Megasaur are also present. There are 8 table games and two specialty ones. Baccarat, Perfect Pairs Blackjack, Face UP 21 and Pontoon are accessible, and you will also find American Roulette and Keno.

Payment Methods at the Uptown Aces

Every reputable casino needs to make the deposit and withdrawal processes as smooth and fast as possible. And Uptown Aces Online Casino makes no exception. Credit cards such as Visa, Mastercard, and American Express are all accepted. E-wallets such as Skrill and Neteller will also do the job. You can also deposit with Bitcoin, Litecoin, Eco Card and EZ Voucher. Withdrawals are set at $25 minimum, but on most of them, you will see $100. You will find the cryptocurrency one especially convenient for US residents. You can also withdraw by the before-mentioned e-wallets, by Bank wire or Check.

Uptown Aces is licensed and registered in Curacao. It comes under its jurisdiction and what is even better is that TST tests the games for being random and fair. Your information and the data of your transactions are protected by SSL certificate, which is pretty much everything you need to have to feel secure. So, in just three words – we have a regulated, tested and secure platform when it comes to the Uptown Aces.

Customer support is up to par with the casino’s big ambitions. You can access them by phone, e-mail and live chat be we recommend the third option. It is fast and reliable, and they will be on your question in no time.

Everything in Three Sentences

We made an extensive evaluation of Uptown Aces Online Casino and we found nothing but the good stuff that will keep you coming back for more. The wide selection of Realtime Gaming classics, the fast and convenient withdrawal options, and the excellent regulation and security make this operator a nice gambling hub for US – Players and punters from worldwide as well. We rate it very high so if you want to try your luck on a trustworthy platform that will give you a nice variety of games to choose from, let’s join Uptown Aces and spin those reels!